I have a small Behringer Eurorack MX 802A mixer for controlling audio volume from a computer. Most of the time I use headphones, but from time to time I need to have audio out of active speakers. Speakers are connected to Main Output and headphones to Headphone/Control room output.

I studied the routing diagram and PCB for a while. To properly trace the PCB would mean removing all the knobs, I decided to trust the webpage. After all it is easy to revert back to original if there would be a problem.

After implementing this modification Main Mix and Control Room & Headphones knobs will control volume independently to their outputs. Also "2TK TO CTRL R" button will be rendered useless. 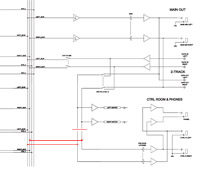 I first removed R302 and R303, then soldered them to the main bus connections. Then added jumper wires from there back to the control room strip.